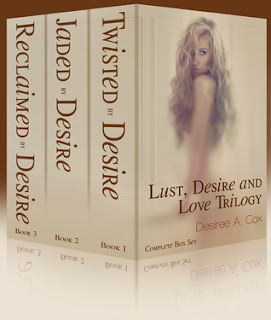 This trilogy will take you on a journey through Jeff and Nikki’s relationship from the time they met. Being together long-term is in question because Nikki still loves her ex, Sky. What a sticky love-triangle. (Sweet & Sassy Book-a-holic’s 2015 Best of the Best Favorite Love Triangle - 2nd place)

Sky holds Nikki’s heart. Jeff consumes her mind. She’s caught is a vicious love triangle. Her relationship with both men is predicated on physical attraction. She has a history and a daughter with Sky yet yearns for more than she had while married to him, but she’s having a hard time walking away. Her mind and heart are twisted about what to do and who to choose. (Twisted By Desire, Book 1).

Everything seemed perfect, until it wasn’t. Nikki experiences some physically and emotionally trying and draining times that will make her and you, the readers, question the rightness of her relationship choice. (Jaded By Desire, Book 2).

Nikki is at an all-time emotional low, and she’s totally vulnerable. Jeff’s emotions are at their peak, and raw. After everything Nikki and Jeff have been through, will he be able to convince her that their love is sincere? (Reclaimed By Desire, Book 3).

For 18+ readers due to explicit sex, sex situations, and language.

"What a fantastic trilogy!! Desiree A Cox packed so much more than I expected in this trilogy and made this a definite MUST READ." ~ Amy

"The author does an excellent job of putting you in Nikki’s head to experience her mixed emotions, joys and fears as she grabs this new life with both hands." ~ Joe

"Desiree A Cox is a talented author, I am really impressed with this series and I enjoy her writing style. I like the way she has built her characters so we gradually find out more of their secrets, and the way she builds drama and emotion." ~ Miss Julie Anne Barrett

"I was totally shocked when some of the things happened, wow! I felt like I was right there with these people experiencing what they were, it was so real. It was steamy, I laughed, I cried several times, oh my; this is a must read." ~ DJo

She left the room the same time Sky did, and all I could do was hope Sky wouldn’t tell her the truth on the elevator ride down. I knew she would pry.

My thoughts were preoccupied with pastel pink, blue, and yellow baby thoughts instead of the mint green, light pink, and pale gray colors of the wedding.

I couldn’t focus on anything. The Christmas holiday blurred by. Abby had a good Christmas with Sky; that was all that really mattered to me.

I had always been pretty good at keeping secrets, but this one was killing me. It had been about a week since I’d found out the news, and I needed to talk to someone, anyone, but I couldn’t. I wasn’t supposed to let anyone know until after the wedding. Jeff demanded that.

Jeff wouldn’t talk to me about the baby either. He flat out told me on the ride home from the hospital not to talk about it with him. He said he would ‘deal with it’ when he was forced to. I knew he wasn’t happy, but I didn’t even know how I should feel about that comment.

I should have been excited with a wedding and a baby on the horizon, but I felt like I wasn’t allowed to be.

Mom had returned from her holiday trip. I wanted so badly to tell her, but I knew better. The judgmental comments would roll in like tsunami waves. It would be ten times worse than when I told her about being pregnant with Abby. At least Sky and I were married when I got pregnant with her. 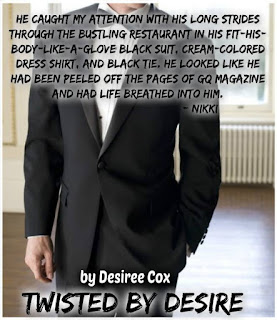 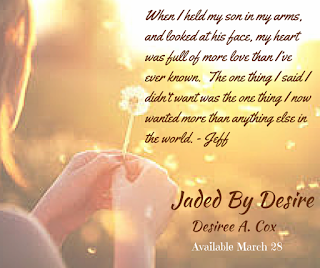 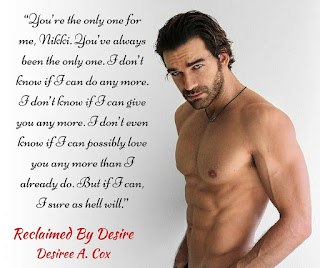 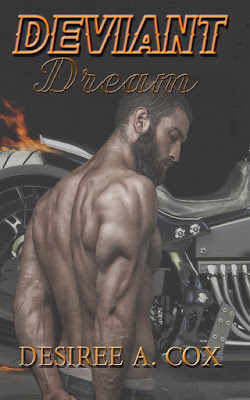 Grab a fan, extra batteries, and a glass of water.

This short story is pure erotica. It contains extremely intense explicit sex, MFMM+, adult language, and sexual situations. It is written for the mature reading audience (21+) who like to push their reading experiences to the brink every now and then. This story isn’t suitable or intended for younger readers or readers who are uncomfortable reading about such strong content.

All Taylor wanted to do was go home after her long shift. First the tire blew out, then her cell phone battery was dead. Her night had become a complete disaster.

Her choices were limited – she could walk to a convenience store a half mile away in heels, or go a few blocks to an after-hours motorcycle bar.

Opting to save her feet, she chose to visit the bar and ignored the previous warnings by a couple of her friends.

What could happen? A few motorcycle clubbers whistling and complimenting her? She’d readily welcome that after the night she’d had.

“Ladies get your fire department on standby and extra pair of panties ready because this book is going to be melting those reading devices and leaving you very wet.”
“Talk about getting down and dirty…Taylor is one nasty little sex kitten who knows what she wants, and once she admits it, will go to any length to get it.”
“This is one smoking hot read! It's definitely a panty melter!”

“So, now that you don’t have anyone coming for you, you want and need our help. Right?” Diesel asked.

His eyes narrowed and became darker. The look on his face was sinister. “Well.” He cleared his throat. “It’s going to cost you.”

Taylor rubbed her hand across her forehead. She dug around in her purse to find her wallet. Once she had it in her hand, she searched to see how much cash she had. She rolled her eyes. Twenty-four fucking dollars. She looked through her credit cards. “Will you take a credit card?”

He reached out and wrapped his long fingers around her hand that was holding the wallet. “We don’t want your money,” Diesel said while he shook his head. He chuckled.

“What …what do you want from me?” Taylor felt her knees buckling slightly. “How am I supposed to pay you?” She had a feeling what he wanted. She wasn’t completely opposed. Diesel was super-hot.

Diesel let the back of his fingertips glide down the side of her face until his hand was under her chin. He held her jaw in his grasp and turned her head slightly to make sure she was looking at him. “I think you already know what the payment is. As a matter of fact, I’d be willing to bet you’re already wet just thinking about it.”

Her heart beat faster. Taylor knew he was right. She could feel her wetness pooling between her thighs. Her panties were more than a little damp and her sex clenched.

Bull moved behind her and placed his warm hands gently on her shoulders. He kneaded his thumbs along the sides of her neck. Taylor leaned her head back as she basked in the fantastic massage. She exhaled her breath and relaxed under his touch. 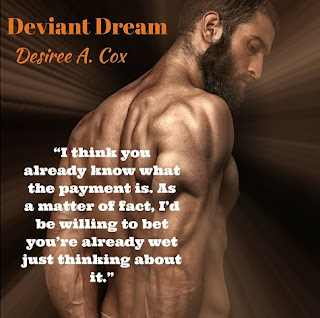 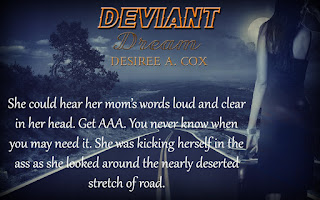 Writing, in one form or another, has always been something she enjoyed. Desiree also enjoys traveling and spending time at the beach.